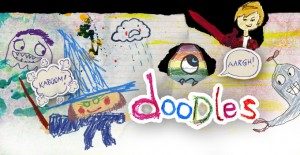 Check it out on ABC 3 Kids… Airing now 🙂

Doodles is a multiplatform, interactive, animated comedy series that takes real people’s drawings and turns them into hilarious micro animated movies which may then be incorporated into mixed media short films. You submit a photograph of a drawing with the hashtag kidsdoodles to Facebook, Instagram, YouTube or Twitter and we may copy and animate the drawing into a micro episode which may then be incorporated into a mixed media short film and posted on Instagram, Twitter, Facebook and/or YouTube.

There are so many doodles to see and they keep on coming. It’s best to check out the Facebook page here:
http://www.abc.net.au/abc3/doodles/

This entry was posted in Film and TV, Interactive, Online and Other, Projects. Bookmark the permalink.